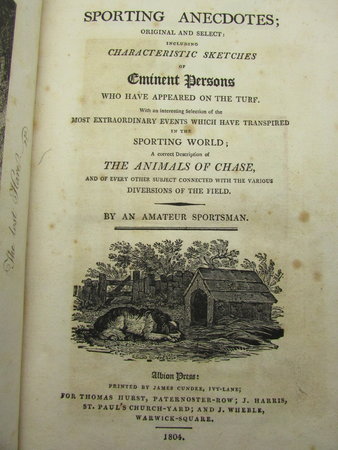 Sporting Anecdotes; Original and select. Including characteristic sketches of Eminent Persons who have appeared on the Turf. With an interesting selection of the most Extraordinary events which have transpired in the Sporting World; A Current description of The Animals of Chase and of every other subject connected with the various Diversions of the Field.

London: Thomas Hurst, J Harris, J Wheble, 1804. First edition. Rebound (probably in the 1950's) in grey cloth. Original label pasted onto spine. vi, [10], 542, [2] pp. Engraved title page, 15 further engraved plates and some further vignettes. Attractive stamp for the "Tetschner Bibliothek" to the verso of the title page. Although anonymous, the book was penned by the journalist and author Pierce Egan (1772-1849) who also trained as a compositor/ printer. 230 by 150mm (9 by 6 inches). Tetschen, Now Děčín, is a town in the Czech Republic. The library was transferred in 1933 by the Czechoslovak military in the course of confiscation and establishment of the castle as a military base by the Nazis. It was taken to Prague and offered to the antiquarian trade. The books of the Tetschner Library, which had originally covered several thousand volumes, were purchased in 1934 by HP Kraus in Prague.

Condition: The label to the spine is a little nicked and somewhat darkened. The pale grey cloth is sound, but has a little foxing to it. Internally, the book is clean and tidy with a little foxing only. The plates are in very good condition, again, with the odd foxing spot.