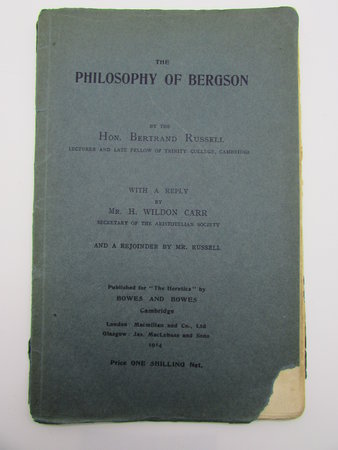 The Philosophy of Bergson

Cambridge: Published for "The Heretics" by Bowes and Bowes, 1914. First edition. In 1911, Bergson had visited Britain for a series of lectures which led to his increasing popularity. In this, Bertrand Russell writes critically of his work - having first attended Bergson's lecture at University College London. 36 (1) pp.
230 mm x 145 mm (9 x 5¾ inches). Henri-Louis Bergson (1859–1941) was a French-Jewish philosopher who was influential in the tradition of continental philosophy, especially during the first half of the 20th century until WW2. Bergson is known for his arguments that processes of immediate experience and intuition are more significant than abstract rationalism and science, for understanding reality.

Condition: In blue/grey paper covers, with small loss to bottom right of front. Spine is a little chipped with a tear to the top. Internally clean, with some page darkening.