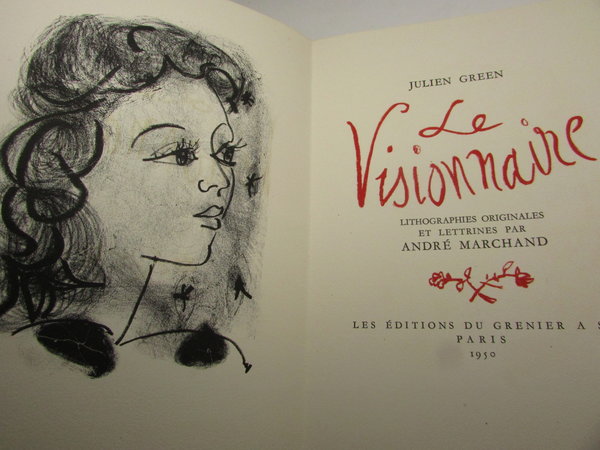 Paris: Les Editions du Grenier A Sel, 1950. Limited edition in sheets. Total limitation 180; this being copy 111. Printed on Velin de Lana. Front., 43 initials, 24 illustrations in the text and 13 plates André MARCHAND. The text has been reworked compared to the original edition of 1934. Signed by Marchand to the colophon. Slipcase, card folder, soft (stiff paper) folder printed in red, half title with colophon to verso, frontis & title. [viii], 9-324 pp.
340 by 260mm (13½ by 10¼ inches). The Visionary is the name that Maria Theresa gave to her cousin Manuel who lives in the dream. Once - only once - he tried to tell her his passion. Captive teenager of a hypocritical and correct environment, to escape it he invented an imaginary world. However, with him takes refuge his desires. And this haunted domain, created from scratch, deforms according to its delirium, shaking it until it wakes up. Then he will let himself die so as not to find the odious real life. The hero of Kafka was the prisoner outside the castle which he was not entering, the Visionary is the prison of his. It is after her death that Marie-Thérèse will discover the truth in his secret books. This work of 1934 will continue to put Green apart, in his unique universe, but which will always remain current by the contradictions it reveals: sexual attraction fought by a no less violent attraction of the spirit. (Le livre du Poche)

André Marchand (1907–1997) was a French painter of the new Paris school and one of the founder members of the Salon de Mai.

Condition: A very nice copy of this work, with charming illustrations. The slipcase is a little bumped, but still in good, strong, clean condition. The spine to the hardback folder is slightly darkened. The book itself is in excellent condition.