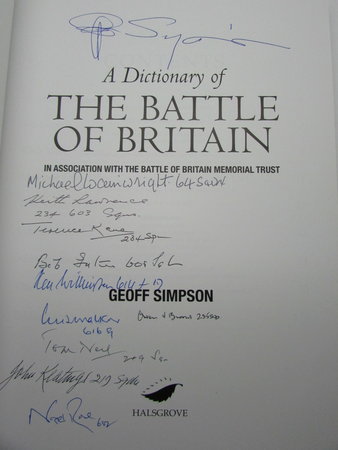 A Dictionary of The Battle of Britain

Wellington: Halsgrove, 2009. First Edition copy of this very limited signed book (exact limitation is unknown). With the signatures of the author and ten surviving pilots who flew in The Battle of Britain. This book was originally created to raise funds for 'The Battle of Britain Memorial Trust'. Hardback.
160 pp. 310 x 220mm (12¼ x 8¾ inches).

'The Few' were 2,353 young men from Great Britain and 574 from overseas (pilots and other aircrew) who were officially recognised as having taken part in The Battle of Britain. 544 lost their lives during the battle.

Condition: In a very good unclipped dust jacket; internally in an as new condition.