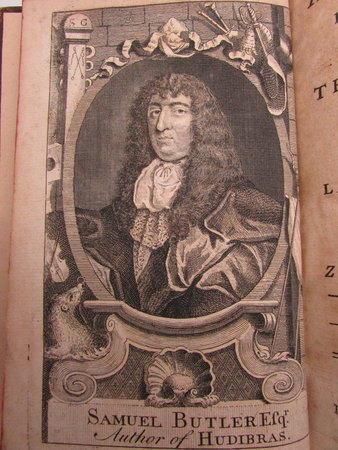 Hudibras, in Three Parts, written in the Time of the Late Wars: corrected and amended. With large Annotations and a Preface by Zachary Grey. Adorn'd with a new set of Cuts.

Dublin: A. Reilly, 1744. In two volumes. Presumably the Irish pirated version of Bentham's Cambridge edition of the same year. Bound in original full calf. With wood-engraved portrait frontispiece (by Vertue after Soest), and 16 fine wood-engraved plates (by Mynde after Hogarth), five of which are folding. Full index at the end of each volume. The first edition to include Zachary Grey's extensive notes.
Volume I - xxxvi, 399, [xv] pp.
Volume II - 414, [vxiii] pp. The work is directed against religious sectarianism. The first part of Hudibras was written in 1658, and the other two in 1664 and 1678 respectively. Very popular in its time, the poem was sufficiently popular to spawn imitators.
One early purchaser of the first two parts was Samuel Pepys. Whilst Pepys acknowledged that the book was the "greatest fashion" he could not see why it was deemed so witty. Hudibras was reprinted many times in the centuries following Butler's death.

Condition: The binding has been skillfully restored, with red morocco labels, lettered, numbered and ruled in gilt. Boards are in good condition with only a little rubbing to edges and corners. New end papers. Small pen squiggle to end paper in volume one. Small neat signatures to title pages. Lacks the list of subscribers (often missing) at end of the first volume.