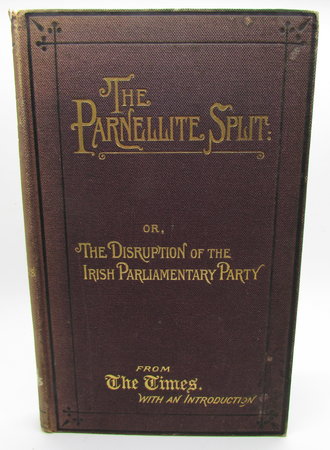 The Parnellite Split Or the Disruption of the Irish Parliamentary Party

London: George Edward Wright / George Routledge & Sons, 1891. A nice copy, albeit ex-Library, of this account of a turbulent period in Anglo-Irish Political History. Burgundy buckram, with gilt titles. 220 by 130mm (8¾ by 5 inches). XX, 196, [iv] pages. Parnell had founded the Irish Parliamentary Party, which dominated Nationalist representation at Westminster, and stood a good chance of obtaining Home Rule from Gladstone's government. But when Parnell was cited as a party in the divorce of Katherine O'Shea, there was a scandal and rift. The party split, and this book contains the Times articles which told of the divisions in the subsequent year. It accounts for the period October to November 1890. Parnell died in October 1891

Condition: The front and read board are in good, clean condition, but there is a little fading and fraying to the spine. Library number to the base of the spine. Library sticker to the ffep and a few other library marks and writings elsewhere. Other than these, the book is in very good condition