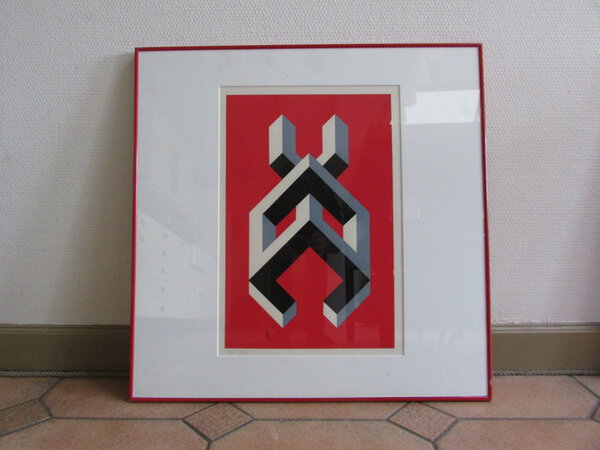 Brom A limited piece of Op-Art

Amsterdam: 1972. An attractive, limited edition abstract composition, in the style of Op Art. Red, black, grey and white. Signed, named and numbered in pencil. This is number 156/200. Presented glazed, behind mounting board and in a red aluminum frame.
Image is 49cm x 33cm. Frame is 65cm x 65cm. (25½ by 25½ inches). Jos de Mey (1928-2007) was a Belgian artist. He was known for his images of optical illusions, impossible figures and his realistic photo-style. From 1942 to 1949 he studied at the Royal Academy of Fine Arts in Ghent and in 1950 he was appointed as a teacher at the same institution, teaching interior design and colour harmony. In 1970 De Mey became a lecturer at the new Stedelijk Higher Architecture Institute, also in Ghent. He taught until 1980. He was also a guest lecturer several times at the Institute of Colour psychology in Salzburg. The emphasis on architecture and nature in his works tend towards spatial structure, the light and the matter. In his work, characters from the work of René Magritte, Maurits Cornelis Escher, and Pieter Bruegel de Oude play a role.

Condition: There is a small stain to the bottom edge of the image, and a small mark to the top edge of the mounting board, otherwise a vibrant and colourful image. The aluminum frame has a touch of rubbing. The glass appears to have been cut fractionally short, with a 2 mm gap to one edge. Overall though, a lovely item.