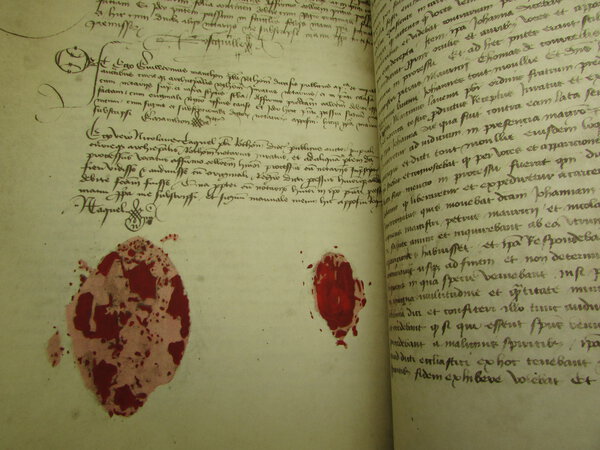 Paris: Plon, 1955. First Edition Thus. A fascinating facsimile of the details of the trial of condemnation of Joan of Arc. Produced on heavy paper designed to imitate the original vellum. Pages are reproduced full size, and include page numbers, marginal notations and even remnants of wax seals! The facsimile is bound in vellum paper over card, with the title in red to the front and spine. Accompanied by an 18 page booklet (Arches paper) containing an introduction by Marchand. The limitation states that only 500 copies of this facsimile were produced. Both the facsimile and the booklet are held in a portfolio with a red cloth spine and paper-covered boards. The whole in a matching slipcase, red cloth spine and paper boards. The facsimile is obviously in its original Latin; the accompanying booklet is in modern French. Marchand was an important librarian at France's Bibliothèque de l'Assemblée Nationale.

Condition: The facsimile, booklet and portfolio are all in a fine condition. The slipcase is in a very good condition, with just general wear / bumping to the edges.