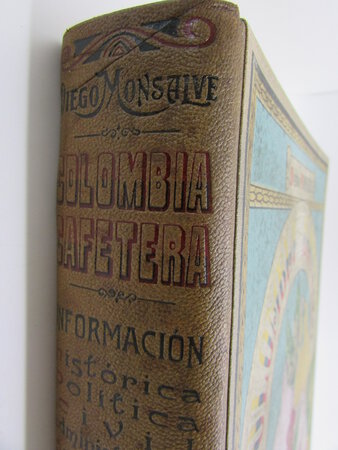 Barcelona: 1927. This work is considered a significant contribution to the understanding of the economic history of Colombia in the first half of the 20th century. Hardback first edition. In Spanish. Fabulously illustrated with over 450 images, some of which are full-page colour plates with captioned tissue guards. 950 pages. 350 x 260 mm (13¾ x 10¼ inches). About the Federación Nacional de Cafeteros de Colombia: In 1927, Colombian coffee growers united in order to create an organisation that would represent them nationally and internationally, and that would ensure their well-being and the improvement of their quality of life. Thus was born the National Federation of Coffee Growers of Colombia (Federación Nacional de Cafeteros de Colombia or FNC), considered today as one of the largest rural NGOs in the world. The Federation is a non-profit entity, and is not affiliated with any political party.

Condition: Complete. Boards are a little darkened, and endpapers are slightly pitted. Internally the rest of the book is in a very good condtion, with a little foxing mostly confined to the tissue guards.