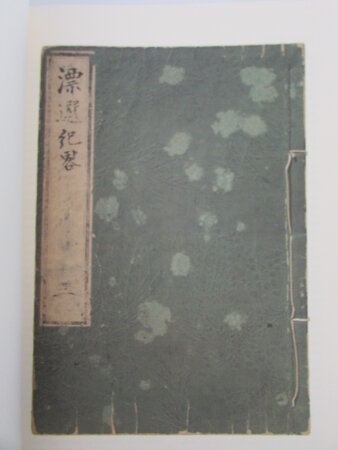 Philadelphia: Rosenbach Museum & Library, 1999. Black softback with blue dust jacket. Front cover overlaid with an illustration. The exhibition at the Rosenbach featured a copy of Manjiro's own lavishly illustrated manuscript account of his adventures, and this companion book includes full-page colour reproductions the manuscript. 116 pages. 260 x 185 mm (10¼ x 7¼ inches). In 1843 (at just 16 years old) Nakahama Manjirō became the first Japanese person to live in the United States. Two years earlier, at the tender age of 14, he had been rescued after a shipwreck by the crew of the 'John Howland', an American whale ship from New Bedford, Massachusetts. Having mastered English, sailing the world on whaling ships for several years, and trying his hand at gold mining, Manjirō later risked his life to go back to Japan in an attempt to make his homeland more "hospitable."
After much suspicion, and many interrogations, he was later to become a shōgun's samurai, a teacher of English and American culture, and his translation of Nathaniel Bowditch's 'The New American Practical Navigator' constituted the introduction of modern scientific navigation methods to Japan. His life story is certainly a fascinating one, and number of Manjirō's students would go on to play seminal roles in the Meiji-era modernisation of Japan.
This information has been extrapolated from an article written by Junji Kitadai.