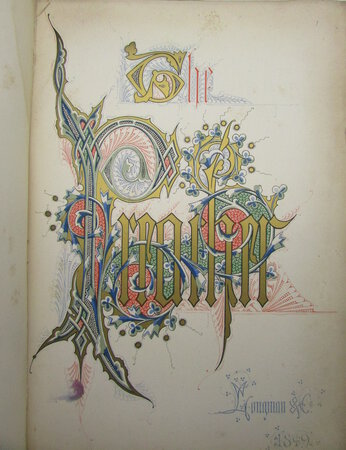 London: Longman & Co, 1849. First edition. Beautifully printed illuminations by Jones. 18 leaves (34 pages) chromolithographed in gold and colour. Decorated in Gothic style in deep relief. The boards have been covered in red leather, which follows, almost exactly, the original design. The book is stamped "Bound by Remnant, Edmonds and Remnant" to the first blank page, but we assume that this is a slightly later re-bind, rather than a variant binding (?) re-backed in morocco retaining much of original spine. A perfect example of the Victorian mania for unusual book bindings and bookbinding materials. Red and blue design to endpapers. These have been printed on a heavy textured paper. The text is an extract from the Book of Ecclesiastes, Chapters 1 - 12 from the King James Bible. Unpaginated. All edges gilt. The book contains two bookplates. The armorial plate of Aubrey G. Jamaica. Aubrey George Spencer (1795–1872) was the first bishop of the Anglican Diocese of Newfoundland and Bermuda (1839–1843). He was also bishop of Jamaica. His brother George Spencer became Bishop of Madras. He is from the Spencer family. His title and the mitre on his bookplate identify this as having come into his possession between 1849 and 1855. Spencer was firmly Protestant, seeing all but the Church of England as being in error, and was the author of several works supporting this view. It is ironic then, that the ownership of the book passed to the library of the Mount Street Jesuits in London, and the second bookplate shows that it belonged to the Society of Jesus. (Mount Street is still a Jesuit mission, and is today used as a retreat centre). Quayle (Eric) The Collector's Book of Books (1971) states on page 111, 'The London firm of Remnant & Edmonds specialised in unusual bindings..... Their piece de resistance was The Preacher, 1849, by Owen Jones. They invented a method whereby they were able accurately to imitate carved wood in almost Grindling Gibbons fashion. The pattern was burnt into the wood under considerable pressure, but few copies have managed to survive to the present day.' The partnership of Thomas Remnant and Jacob Edmonds from 1831; Frederick Remnant succeeded his father.

Owen Jones (1809-1874) was an English / Welsh architect. A versatile architect and designer, he was also one of the most influential design theorists of the nineteenth century. Today, he is remembered for his "Grammar of Ornamentation" and his descriptions of the decoration of the Alhambra. He also designed a number of beautifully produced books, of which this is perhaps the finest example.

Condition: The binding is a little rubbed and worn, particularly to the edges of the spine. Slight loss of surface red to some areas of the binding. The re-backing to the spine is slightly lifting in parts. The binding is reinforced with heavy duty archival tape to the front and rear hinge. There is intermittent foxing to the pages, and there is a faint water stain to the corner of the pages affecting the second half of the book. One leaf is loose, and half detached, but is hanging in there! Overall a Good copy+ of this scarce work.