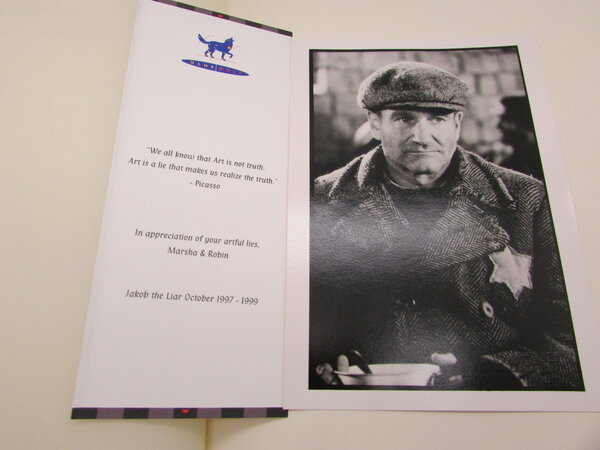 < >
Signed by Robin and Marsha Williams with a dedication to the Set Dresser of the film.
KASSOVITZ, Peter, DECOIN, Didier and HUTCHINSON, Ron.

Jakob the Liar. A Screenplay. Based on the novel Jakob der Lügner by Jurek Becker.

N/A, 1999. Full embossed leather, (very) limited edition copy of the screenplay for Jakob the Liar. Beautifully bound by the Vogel Bindery. Typescript, produced for those involved in the 1999 film starring Robin Williams. There is a black and white photograph of Williams (in role) tipped onto the half title. The work comes with a card, with the "Blue Wolf" logo to the top. This has a Picasso quote, and "In appreciation of your artful lies. Marsha and Robin." In a large hand across the title page, a gift inscription states "Ian, you made a world that was painfully real. Thank you. Robin Williams". The title is also signed "Dear Ian, thanks, Marsha Williams." 290 x 230 mm (11½ by 9 inches). 143 pages. Jakob the Liar is an American war comedy-drama film directed by Peter Kassovitz, produced by Steven Haft, Marsha Garces Williams and written by Kassovitz and Didier Decoin.