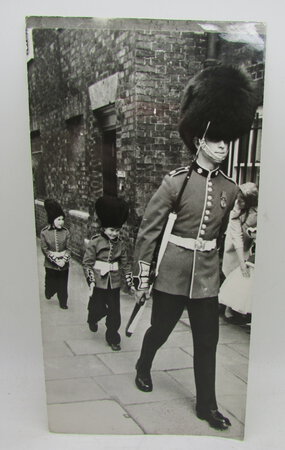 Keystone Photo Archive, 1968. A black and white photograph of a Guardsmen at St James' Palace in London, being followed by two children from Miss Betty Vacani's school of dancing. The event was being held to support the Invalid Children's Association in London. 240 by 120mm (9½ by 4¾ inches). Keystone data in Dutch to the verso of the print. The gelatin silver process is the photographic process used with currently available black-and-white films and printing papers. A suspension of silver salts in gelatin is coated onto a support such as glass, flexible plastic or film, baryta paper, or resin-coated paper. First developed in the 1880's, it became popular after a Bartya coating was added in 1894.