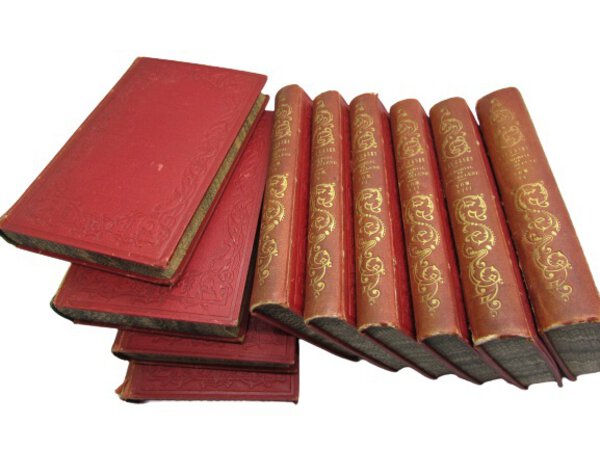 < >
A complete set (including the supplementary volumes) of this classic memoir of Napoleon
LAS CASES, Comte de

Paris: H. Remy, 1821. 8 volumes of the Mémorial de Sainte-Hélène and 2 volumes of the Suite au Mémorial de Sainte-Hélène. Complete. First Thus - H. Remy of Bruxelles edition. The ten volumes are in uniform red cloth, with blind stamped design to the boards and gilt decoration and titles to the spine. Unfortunately the final volume (V2. of the suite) has lost its spine. Each volume is 17cm x 10 cm. Generally, there is some cracking to the hinges, a little nicking to the head and tail of the spine. Moderate foxing to each volume. There are a few other flaws, itemised in the collation below. (1). Memorial Tome premier. 1822. Frontis engraving: floor plan of Longwood. 350 pages. (2). Memorial Tome Second. 1822. 330 pages. (3). Memorial Tome Troisieme. 1823. 320 pages. folding engraved map of the Campagne d'Italie (moderate foxing to map.) (4). Memorial Tome Quatrieme. 1823. 324 pages. (5). Memorial Tome Cinquieme. 1823. 332 pages. (6). Memorial Tome Sixieme. 1823. 326 pages. Slight weakness to the front hinge. (7). Memorial Tome Septieme. 1823. 323 pages. Closed tear and creasing to the rear end paper. (8). Memorial Tome Huitieme. 1823. 400 pages. Frontis folding Carte de L'Ile St Helene by a former engineer of Napoleon (from information by Marchand). Light to moderate foxing to the engraving. (9). Suite au Memorial. 1824. 468 pages. Frontis engraving of the Comte de Las Cases. (10). Suite au Memorial Tome II. 1825. 472 pages. lacks spine. Front board is held in place by thick archival tape. Each volume has the bookplate of Henri de Greeve. He was a Roman Catholic Priest, radio speaker on KRO in the 1930's and charity worker in The Netherlands. During the Second World War, he was interned because of his opposition to National Socialism. He died in 1974. A journal-memoir of the beginning of Napoleon Bonaparte's exile on Saint Helena. The core of the work transcribes Las Cases' near-daily conversations with the former Emperor on his life, his career, his political philosophy, and the conditions of his exile. First published in 1823 after Napoleon's death, the work was an immediate and continuing literary success, receiving multiple translations and appearing in new editions throughout the 19th century and into the 20th. The work entered the popular imagination as something like Napoleon's own personal and political testament, and as such became a founding text in the development of the Napoleon cult and the ideology of Bonapartism.