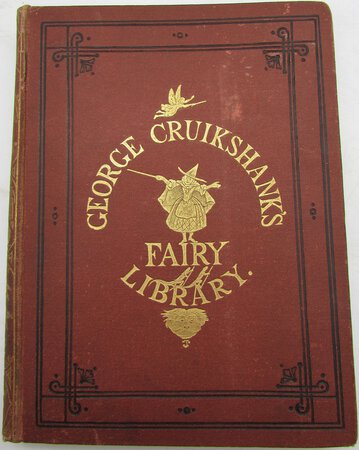 London: Bell & Daldy. A scarce variant of Cruickshank's Fairy Library. Issued by Bell and Daldy in 1865, this includes several of Cruikshank's addresses to the public. The collection includes Hop_O'-My-Thumb; Jack and the Beanstalk; Cinderella & Puss in Boots. Each has its own pagination. The typesetting seems to have been carried from the individual issues of these, so although there are no separate title pages, these are still counted in the pagination. Each of the fairly tales has a frontis and a list of illustrations (Puss in Boots has no list). Each of the tales has 6 plates (24 total). The list presents each "moral" in the picture - so 38 vignettes in the plates are mentioned.
Brown buckram with black and gilt decoration and titles. Slight dulling to the gilt, with a touch of bumping and slight rubbing to the front board. Appears to be new end papers. Inside, the binding is in good, strong condition. There is intermittent mild to moderate foxing throughout the book.
In the first of the addresses to the public he clarifies his relation to his nephew Percy (who was using the name Cruikshank without clarification). He was careful not to blame Percy, but his publisher. In the second, he addresses a mistake that Harriet Beecher Stowe made regarding meeting him. The last, which is far longer, has an address to parents, in which he puts his side against the criticisms of Charles Dickens regarding his Fairy Library. He emphasises his commitment to the Temperance movement.
The individual parts were issued between 1853 and 1864. This appears to have been the first Collected version of them. (OCLC: 1159821580). There was a subsequent George Bell edition in 1885,
30, 32, 32, 40 pp. 19 cm x 14.5 cm