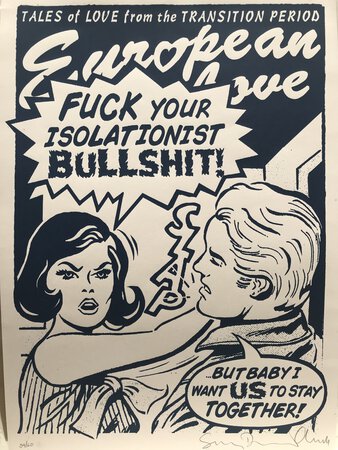 ShangrilART, 2017. Hand screenprinted with Pip Seymour indigo ink on 380 microns board. Signed by both artists, and numbered # 34 of a limited edition of 60. One of eleven Brexit based artworks by Chris Hopewell and Stanley Donwood. Tales of love from the transition period. Thwarted romance, doomed love, hopeless heartache, and a slap in the face! 590 x 420 mm (23¼ x 16½ inches). Stanley Donwood is the pen name of British artist and writer Dan Rickwood. He is best known for his work on the artwork for the musician Thom Torke and his band Radiohead.