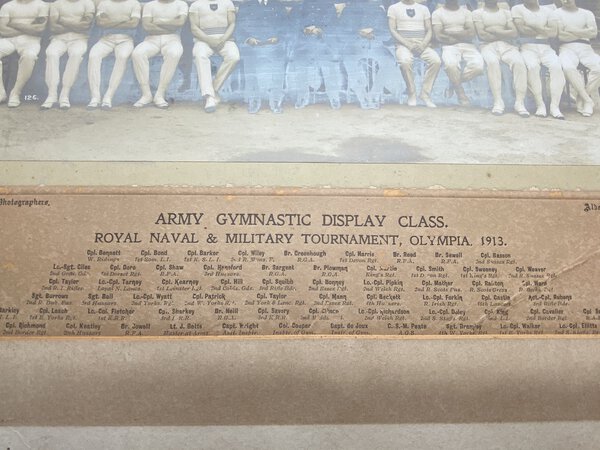 London: Gale & Polden Ltd, 1913. A silver gelatin photograph of the Army Gymnastic Display Class that appeared at the Royal Tournament of 1913. The photograph is tipped onto a card mount. Very slightly faded photograph, with a touch of glue to the edges. Image size 290 x 200 mm (11½ x7¾ inches). Below the photograph, is the list of those featured with their rank and regiment. The card is in turn mounted beneath a card mount. The mount is faded where it has been under a frame. Some cracking to the card to the rear - slightly creased to the corner of the card. Mount size 44cm x 40cm. The Royal tournament was held each summer at Olympia. Looking at the officers and NCO's here, in the peak of fitness, one inevitably wonders how many of them survived the war which started less than a year later.