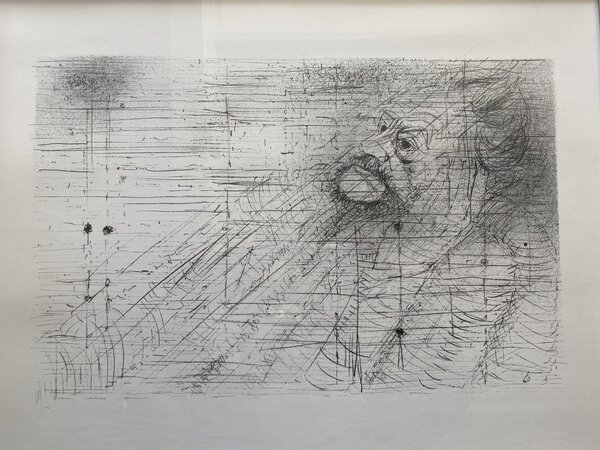 1870. The label to the back of this black and white image states " Original-Graphik von Ernst Barlach" The image is clearly of Barlach. But it appears to be a lithograph of an ink original, rather than an actual ink drawing. It is difficult to be certain, as the paper has been secured to the glass at the edges, and could not neatly be removed (So we have left it secured). Although the image has marked similarities with other drawn works of Barlach, we have been unable to locate another copy of this image. There is possibly an artist's initials to the lower right of the frame (see pics). Underneath the frame, to the rear of the image, is written "6 abels wie ist 883" It is on heavy art paper, and in very good clean condition. Held in a white glazed frame. The frame has a few tiny nicks to the edges, but overall an attractive and striking portrait.
Image area 53cm wide by 35 cm high (13¾ by 20¾ inches). Frame area 67cm x 52.5cm. Ernst Heinrich Barlach (1870-1978) was a German expressionist sculptor, printmaker and writer. Although he was a supporter of the war in the years leading to World War I, his participation in the war made him change his position, and he is mostly known for his sculptures protesting against the war. He felt foul of the Nazi party and was labeled degenerate. He did produce a number of self-portraits - largely woodcuts.