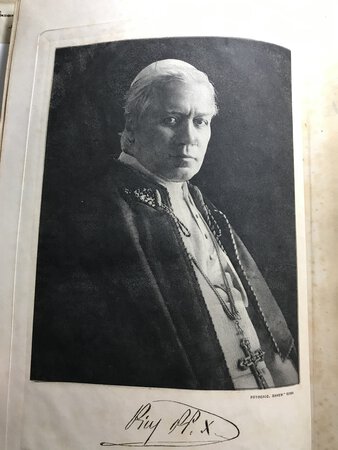 These volumes came from the St Birgittae de Sion (Bridgettine) monastery at Chudleigh in Devon. They were donated to the Abbey (and each has an inscription stating this) by the Rev. Benedict Williamson. Wiliamson was a prominent Catholic Architect, and supporter of the Bridgetinnes. He was ordained a priest in 1909 and was behind many of the finest early 20th Century Catholic Churches.

*Acta Apostolicae Sedis (Latin for "Acts of the Apostolic See"), often cited as AAS, is the official gazette of the Holy See, appearing about twelve times a year. It was established by Pope Pius X on 29 September 1908 with the decree Promulgandi Pontificias Constitutiones, and publication began in January 1909. It contains all the principal decrees, encyclical letters, decisions of Roman congregations, and notices of ecclesiastical appointments. The laws contained in it are to be considered promulgated when published, and effective three months from date of issue, unless a shorter or longer time is specified in the law