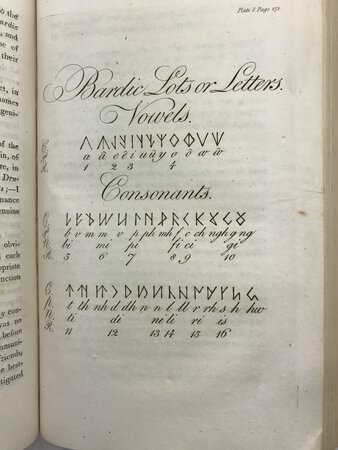 Celtic Researches, on the Origin, Traditions & Language, of the Ancient Britons; with Some Introductory Sketches, on Primitive Society.

London: Printed for the Author and Sold By J. Booth, 1804. First edition. Ex-reference library copy, now in hardback green binding, with gilt title to spine. Original inside, complete with two plates of runes and a chart of "primitive articulations". lxxiii (list of subscribers), 561 pp. Edward Davies (1756 – 1831) was a Welsh writer and clergyman. His fascination with the origins of Celtic languages and the meaning of Celtic mythology led him to become part of the 19th century reinvention of Druidic tradition.