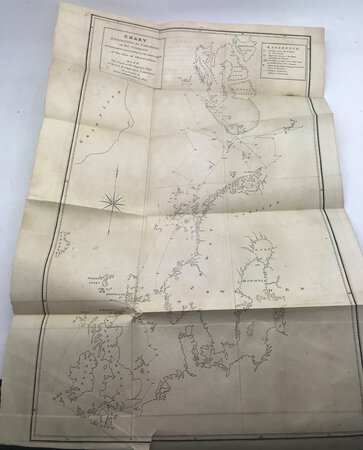 An Essay on the Variation of the Compass, shewing how far it is influenced by a change in the direction of the ship's head, with an exposition of the dangers arising to navigators from not allowing for this change of variation. Interspersed with Practical, Observations and Remarks.

Edinburgh: Printed for William Blackwood, Prince's Street; and John Murray, Bookseller of the Admiralty and Board of Longit, 1817. Scarce First Edition. This is an ex-library of the copy from the Literary And Philosophical Society in Newcastle. In brown / green cloth hardback boards. Complete; including frontis folding chart entitled "Exhibiting the Variation of the Compass agreeable to the position of the Ships Head at the time of Observation. Also the track of His Majestys Ships Sybille & Princess Carolina in a Cruize to East Greenland in 1814." 140 pages. 220 x 140 mm (8¾ x 5½ inches).

Condition: Boards are darkened, and have some very small spots of soiling. Fold-out has small tear to very edges. Unfortunately, aside from the expected library stamps at the front and on verso of fold-out, the book has some damage from damp. Several of the pages have obviously stuck together at some point, and been forcibly opened, leading to loss of text. Most of the tables are still in a good condition, but towards the back the condition is worse. Only in a fair condition. See photos.