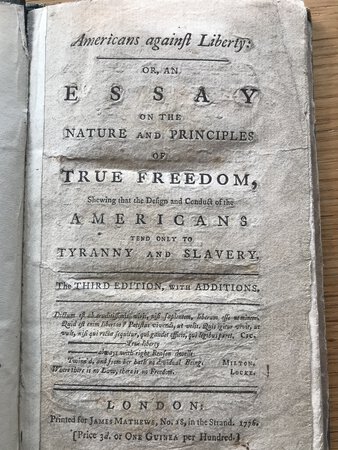 Americans against Liberty or an Essay on the Nature and Principles of True Freedom, shewing that the designs and conduct of the Americans tend only to tyranny and slavery. The THIRD EDITION with additions.

London: James Mathews, 1776. First published in 1775. This third edition was printed in the year of the Declaration of Independence, adopted by the Continental Congress on July 4, 1776, when 13 American colonies severed their political connections to Great Britain. Ambrose Serle was the private secretary of the British General William Howe (Lord Howe).

This important pamphlet was published anonymously, and defended the British Empire as a rightful and just government, arguing against the rebellious American colonists on religious grounds. Serle directed this work against the secessionists and defends the colonial power as the only legitimate government.

Bound in paper covered hardback boards (once along with another pamphlet?) The outer has now been damaged, and so the back board is almost disbound. Title page age toned. Tape edge where bound in to hardback. 48 pages. 185 x 115 mm (7¼ x 4½ inches). In this same year, William Tryon gave Serle control of the political section of the New-York Gazette, which he held from September 1776 to July 1777.