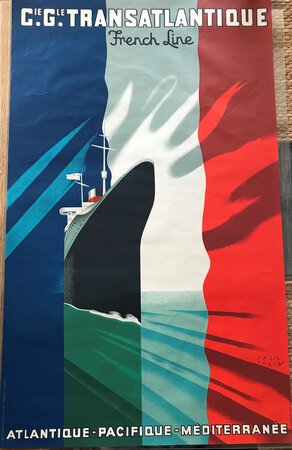 Paris: Imprimerie S. A. Courbet. Poster featuring the famous 'Normandie' liner. This was produced (circa 1950) in response to the advancing popularity of airlines for transcontinental travel. The image of the ship emphasises stability, safety, comfort, style and luxury. A beautiful ocean liner as indicated by the enormous proportions of the ship. Featuring the French national colours, and the liner's huge, imposing bow dominates this striking image. 1000 x 610 mm (39¼ x 24 inches). The poster is signed in the plate on the lower right.

Paul Colin (1892 - 1985) was one of France's greatest poster artists. Famous for his 1925 poster for the Revue Nègre, which helped launch the career of Josephine Baker (who also became his mistress). Colin is considered a master of modern school or poster art, and created more than 1400 posters, many theatrical sets and also costume designs.