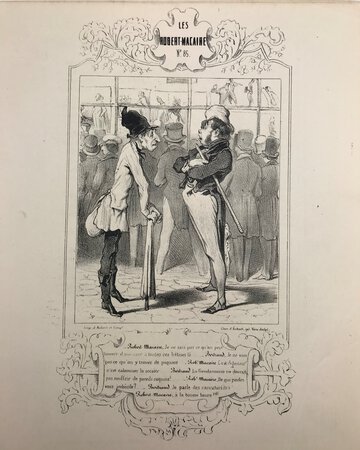 Paris: Aubert et Cie, 1839. Robert Macaire is an unscrupulous fictional character who appears in a number of French plays, films, and other works of art. A series of images was drawn by Daumier and appeared first in the Charivari from 1836 to 1838. These were collected in to the book Les Cent et Un Robert-Macaire, and this is creation number 85 Robert-Macaire aux carreaux, with a small area of text underneath in French. Comes under passe partout, perfect for framing. 265 x 210 mm (10½ x 8¼ inches).