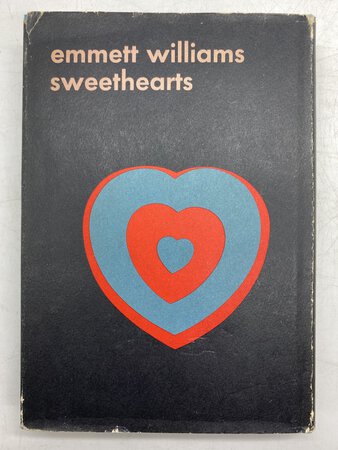 New York: Something Else Press inc, 1967. First Edition. Hardback in dust wrapper. An erotic poem cycle or collection of so-called concrete poems in a good or better dust jacket. The non-paginated contents which run from back to front with poems printed only on the verso (or rear) of each leaf i.e. the left page in an open book. Cover illustration: Coeurs Volants by Marcel Duchamp. Clean unclipped dust wrapper, with the original price of $5.95. Wrapper has a touch of edge wear with very slight nicking to the edges, otherwise the wrapper and book are in very good clean condition. Emmett Williams (1925-2007) was an American poet. He lived in Europe from 1949 to 1966, during which time he was involved in the Darmstadt circle of concrete poetry, and was the European coordinator of Fluxus, as well as acting as a translator of Václav Havel's work and being a founding member of the Domaine Poétique in Paris. 205 x 145 mm (8 x 5¾ inches).