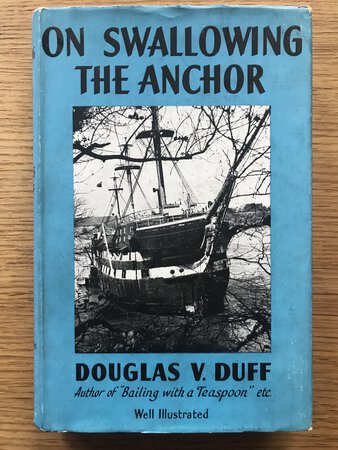 On Swallowing the Anchor

London: John Long Limited, 1954. First Edition in original dust jacket. A memoir written by Douglas Valder Duff, once a British merchant seaman, Royal Navy officer, police officer, and author of over 100 books, including memoirs and books for children. Red cloth hardback book, with a photographic b/w frontis and several other b/w plates throughout. Dust jacket is lightly rubbed and soiled, but in good shape. Book in very good shape, with some light foxing inside, and to page edges. Also includes a loosely inserted letter from a couple called Mac and Phyllis gifting the book to their friends for Xmas 1954. The letter reveals that Mac was going with his friend Fatty Duff - as the letter calls him - to Palestine in the following February at the request of the Israeli government. 224 pages 220 x 145 mm (8¾ x 5¾ inches)