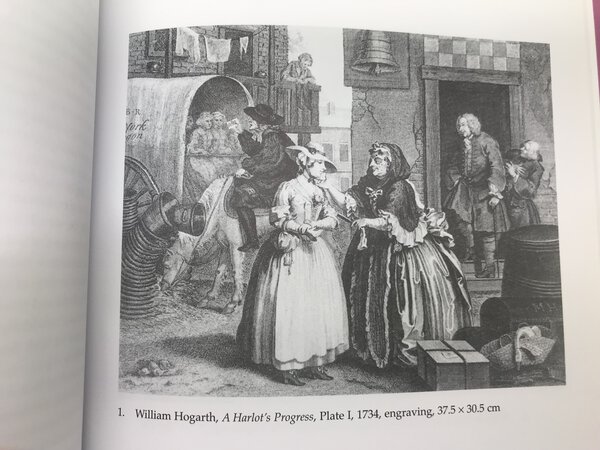 Aldershot: Ashgate Publishing Limited, 2004. Scarce First Edition hardback in unclipped dust jacket. Book in black cloth with gilt stamped title to spine. Book and dust jacket both in very good / fine condition. B/w illustrations. 211 pages. 240 x 160 mm (9½ x 6¼ inches).
From the inside of the book's dust jacket: Prostitution was central to popular print depictions of London in the eighteenth century. Whether deployed as incidental colour in street scenes or providing the sole subject matter for prints, the figure of the prostitute lay at the very heart of the project to depict the fabric and character of the emerging metropolis. In this, the first in-depth examination of the numerous images of prostitution produced for London's print market throughout the eighteenth century, Sophie Carter challenges perceptions of the period as an era of healthy and largely tolerant ribaldry, demonstrating instead how such imagery was born of and riven by extreme cultural anxiety. Situating images of prostitution within the wider social context of their production and reception, and drawing on a range of contemporary moral, legal and literary discourses, Carter presents the prostitute as a key figure through which to trace prevailing attitudes towards gender, sexuality and public order in the context of urban culture. Identifying these images as a coherent and distinct category of popular print imagery, she also shows how they constitute a valuable site through which the public role and representational strategies of popular print culture itself can be explored.