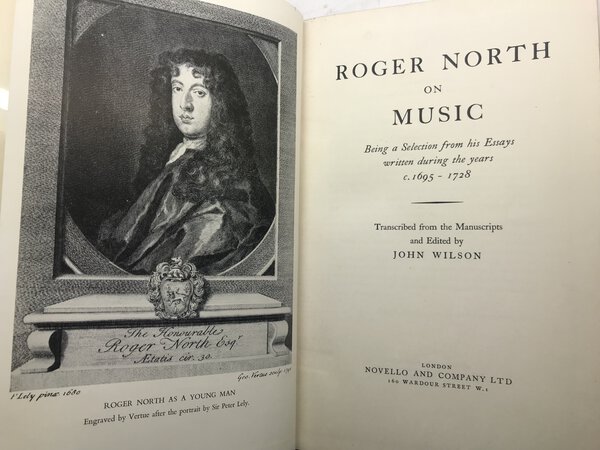 Roger North on Music. Being a Selection from his Essays written during the years c. 1695-1728

From the inside of the dust jacket:

THE HONBLE ROGER NORTH was a rising lawyer in the reign of Charles II, and lived for some years at the centre of London's political and cultural life. He was a man of wide interests and inquiring mind, who wrote engagingly and at length on many subjects. Music was for him a lifelong study and pursuit, and in his later years he wrote a series of essays both on music and on acoustical theory which together run to something like a third of a million words. The manuscripts are preserved in the British Museum and the Library of Hereford Cathedral, and only a small proportion of this material has hitherto been published. John Wilson has transcribed and edited an ample selection from North's 2000 pages and the result is a volume of musical discourse and criticism that is unique in its period. Enliven- ed by its author's individual and sometimes witty style, it reflects almost every aspect of musical life and thought in the time of Henry Purcell and in the England to which Handel came in 1710. The student of seventeenth and eighteenth- century music will find that Roger North on Music is a new and unusual source-book. The general musical reader, whom the editor has kept in mind, will find that its lively and wide- ranging essays enhance his appreciation of the music of the period.