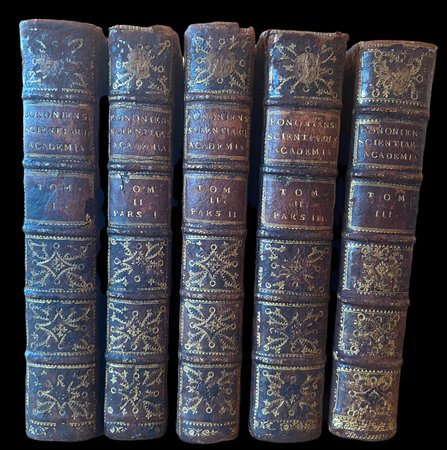 Bononiae: ex Typographia Lelii a Vulpe. The first five full volumes in this series, containing: Volume 1) Printed 1748 (reprint) [viii], 1-645pp Contains engraved title and 9 full page or folding plates. In two parts. The Commentaria (p1-297) and the Opuscula (301-645). This second part includes the important treatise by Eustachii Manfredd (p599-641 and 2 of the plates) entitled 'De novissimis circa fixorum siderum errores observationibus'. This confirmed James Bradley's hypothesis about astronomical phenomena, and together they provided the first evidence of the Earth's movement around the Sun (Ie the first scientific confirmation of Copernicus' work). (2) Vol. II Part I. printed 1745 (1st edition - possibly later impression as errate shows amendments to August 1745). [vi], 1-506 [ii]. pp Engraved title. Commentaria. No plates (none called for). (3) Vol. II part II. Printed 1746. (1st edition errata to July 27th 1746). Viii, 1-406 [ii]. pp Engraved title and 24 engraved plates (complete), (including some lovely plates of the natural world, and some muscle and artery illustrations). This volume sees the first printing of the first volume of 'Opusculorum ad res physicas et mathematicas pertinentium,' introducing hyperbolic functions. In this paper, Riccati derives the law of composition of forces by using the principle of virtual velocities. (4) Vol II part III. printed printed 1747. (1st edition, errata to August 1747). viii, 1-568, [ii]. pp. Engraved title and 15 plates (mainly of mathematical or astronomical topics). 95) Vol. III. printed 1755. (1st edition. Errata to June 1754). [vi], 1-509, [i]. pp. Engraved title. Dedication to Pope Benedict XIV, with a rather lovely vignette initial to this. 13 engraved plates including mathematics, natural history and anatomy. All five volumes are in full calf, with gilt titles and decoration to the spines. Each volume is complete (although there were to be later volumes added to this set until 1791). Internally, each volume is in very good condition, with sound binding. Light to moderate foxing to the pages (including the plates). This set belonged to Georges Cuvier, the celebrated French naturalist, and his stamp appears to the title page of each volume. Cuvier is sometimes referred to as the "founding father of paleontology" An opponent of early theories of Evolution (long before Darwin's) he believed that the earth went through cyclical creation and periods of extinction. He identified and named Mastodons and other dinosaurs, and postulated that the Earth went through a period where it was dominated by reptiles. Baron Cuvier was was the director of the Muséum national d'histoire naturelle in Paris intermittently between the years of 1808 and 1831. Each volume also has the discrete stamp of this museum, further reinforcing the provenance. No further library stamps through volumes.