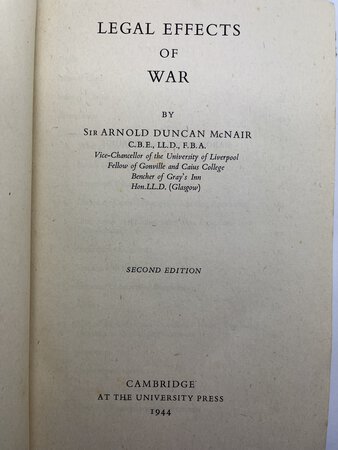 Cambridge: University Press, 1944. Hardback second edition. Signed dedication to front free endpaper dated Singapore 1947. This could be McNair's signature? Boards a little rubbed and warped. Clean inside, with spotting to page edges, some of which are roughly cut / finished. Wartime publication probably explains this!
McNair was elected a judge of the International Court of Justice in The Hague the year after this book was published (1945), a post he held for 10 years. He became Baron McNair in 1955, and was later to become the first President of the European Court of Human Rights at Strasbourg (1959 to 1965). 225 x 145 mm (8¾ x 5¾ inches).