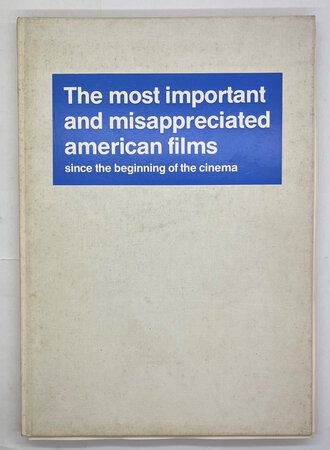 Brussels: Royal Film Archive Museum of Belgium, 1978. First edition. Originally for sale in cinema bookshops or at the Royal Film Archive Museum of Belgium in Brussels. White cloth hardback. Described by the publisher as 'A survey of the entire American cinema from a today's viewpoint: 2,237 films and 692 directors nominated by 203 experts'. Introduction by introduction by Jacques Ledoux, who was the curator of the RFAMB at that time. Cloth slightly grubby as it is white, otherwise book appears unread. 150 pages. 305 x 215 mm (12 x 8½ inches).