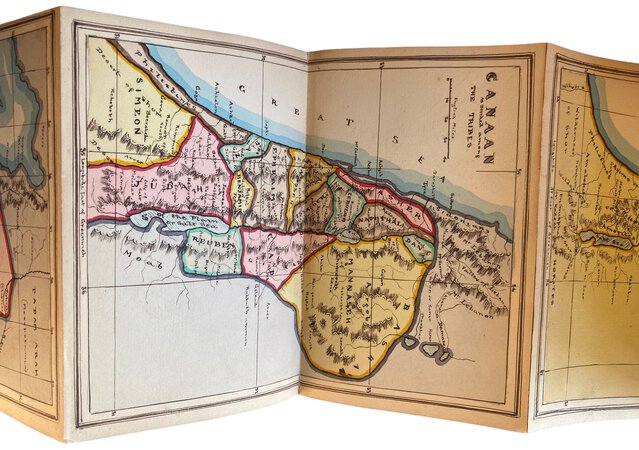 1865. Twelve manuscript maps with dated inscription "A.M. Tatham from her afft. Bro Sherman Dec. 1865". Rebound from a broken binding as a folding leporello series of maps in cloth covered boards "Bible Atlas S.R.T." on original label to the front. Binding is new and without flaws. Slight scratch to blank (back) of first map, otherwise the maps are in excellent condition.

The maps comprise: The Nations of the Ancient World, Assyria and the Adjacent Lands, Canaan in Patriarchal Ages, Canaan as Divided among The Tribes, Dominions of David and Solomon, Armenia, Egypt and Sinai Peninsula Illustrating the Journey of the Israelites to the Promised Land, Jerusalem and its Environs, The Kingdoms of Judah & Israel, Palestine in the time of Our Saviour, Modern Palestine, and The Eastern Mediterranean Illustrating the Travels of St. Paul. Each map folds out to approx. 165 x 133 mm. The maps still retain their original bright colouring.

Sherman Ralph Tatham was born in Hampstead in 1850. Educated at Winchester College 1862 - 1868, he became an architect. Tatham died in Hampstead in 1923 and is buried in Highgate Cemetery. The dedication here is to his younger sister Anna Maria Tatham.