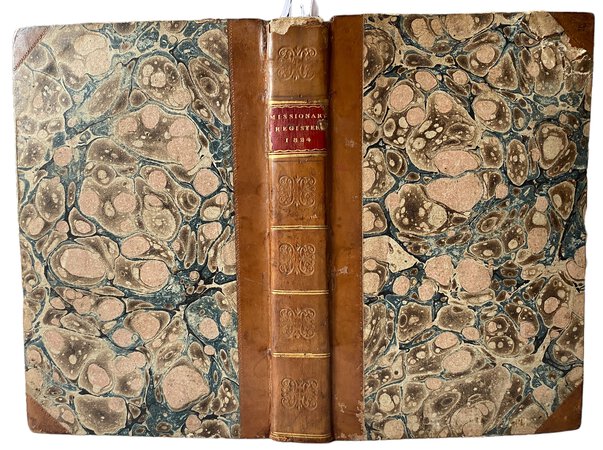 Missionary Register Survey of the Protestant Missionary Stations throughout the world in their geographical order. Full Year 1824

London: L. B. Seeley, 1824. Half calf binding with embossed decoration and burgundy label with gilt titles to spine. A touch of nicking to the spine and slight rubbing only. Ownership signature of Elizabeth Agnes Fitzgerald of Listowel. A full year of this monthly publication comprising brief reports from each station around the world, divided into United Kingdom, Africa, Mediterranean, the Black & Caspian seas, India, Australasia, North & South America. 4 engraved plates and one map. In addition there are often articles and engravings, including: February - An obituary of four native Christians, and a lengthy report on the Mission to convert the Jews. Engraved plate of the Indian goddess Kalee. April - A memoir of the late Rev. Wililiam Ward, an engraving of a hindoo widow casting herself onto her husbands pyre. June - A Memoir of Theophilus Solomon Schumann. July - A memoir of the Rev James Richards. August - A memoir of the Rev F.C.G. Schroeter, an engraving of the Syrian college at Travancore. September - An obituary of the Rev. T.C. Deininger. October - An obituary of Mr John Harle, an engraved map of Cape Mesurado. November - An obituary of Drinave (a youth training in England), an engraved plate of the temple at Juggernaut. December - an obituary of the Rev. Philander Chase. 582 pages. 220 by 140mm (8¾ by 5½ inches).