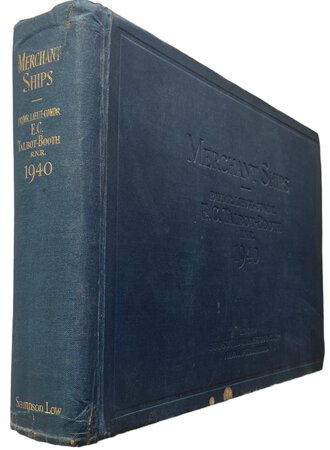 London: Sampson Low Marston & Co, 1940. First edition Thus. The Merchant Navy companion volume to "Janes Fighting Ships." One of the scarce wartime issue copies. In fact, the first issued during the war. Coloured Frontis of the "Red Duster" Funnel recognition charts and flags of the world (all in black and white). Merchant ships of each nation, with data and a black and white silhouette drawing in many case. Orignial blue cloth in excellent condition but for a small stain to the front board. The wartime issue also included "war losses" with lists of the ships lost during the conflict. Very heavy book (over 3 kg) so additional shipping may be required. 230 by 320mm (9 by 12½ inches).