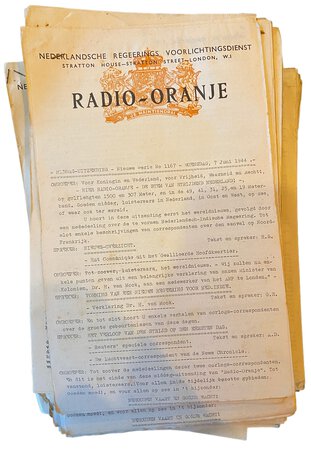 London: RVD / Ministry of General Affairs, 1944. A fascinating archive of Radio Transcripts from world war two. There are over 160 transcripts - approximately half are transcripts of the Radio Oranje broadcasts (which went out regularly via the BBC World Service for the Dutch under occupation). The other half are transcripts from the daily summary of the Luisterdienst - or Listening service. Effectively this is a summary of the world news, with particular focus where it affects the Netherlands. The transcripts are all on headed paper, and are stapled in one corner (a number are separating where staples have rusted). They vary in length from 2 to 10 pages, but average 4 or 6 pages (so approximately 800 typed pages of transcript typed to one or both sides).
From 1930 onwards, the Dutch government felt the need for a body that could give a correct impression abroad of the politics conducted in the Kingdom of the Netherlands. In 1940, this was evacuated to London, and the need for accurate information about what was happening became far more pressing.
The First transcript is dated 7th August 1943 and the last is 23rd April 1945. (Please note - although a large archive this is not a complete run / record). The information given includes explanations about why the Allies were undertaking mass bombings, regular updates from the various Fronts (including Russia and Japan) News on Montgomery's movements and suggestions that this may mean that invasion was imminent, details about Hitler's 55th Birthday etc. Of particular interest is the Bulletin of 6th June 1944 (15 pages long) which begins "Invasion reports from the German side" and giving German reports of attacks between Dunkirk and Calais. Of course the Government offering Truth to the people, also included an element of deception aimed at the Germans, as this was not the invasion site. On the 7th June it is announced in the news that "News from headquarters is that progress is being made and some landings have occurred." (Both Radio Oranje and Luisterdienst transcripts for these days). There is then a short gap in transcripts until the 20th.