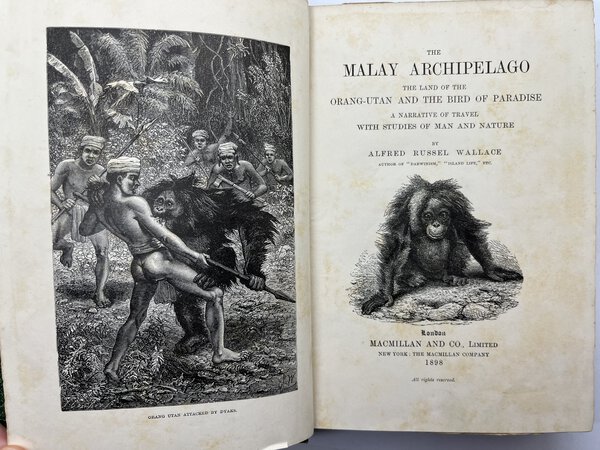 The Malay Archipelago. The land of the orang-utan, and the bird of paradise. A narrative of travel, with studies of man and nature.

London and New York: Macmillan and Co. Ltd. New edition (published in 1898) of the fascinating work by the British naturalist Alfred Russel Wallace. Covering his exploration of The Malay Archipelago including Malaysia, Singapore, the islands of Indonesia (then known as the Dutch East Indies), and the island of New Guinea. Illustrated with engravings of Wallace's observations and collected specimens, by illustrators Thomas Baines, Walter Hood Fitch, John Gerrard Keulemans, E. W. Robinson, Joseph Wolf and T. W. Wood. The book describes each island in turn, with detailed accounts of the physical and human geography found, and specimens collected. Wallace also describes his experiences, the difficulties of travel, and the help he received from the different indigenous people. His preface says he travelled over 14,000 miles and collected 125,660 natural history specimens.

Complete: xvii, 1 leaf, 515, [1] pages: frontispiece, illustrations, plates, maps (some folded). Green percaline boards have some staining, and there is some foxing, but contents are in good condition.