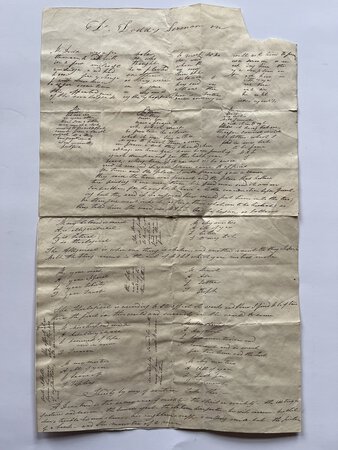 1778. Manuscript which appears to be the secrets of a sermon that Reverend Dr. William Dodd - AKA the Macaroni Parson - was to give. The term 'macaroni 'was a pejorative term used to describe a fashionable mid 18th century English man (later this would be known as 'Dandy'). The manuscript is anonymous, and written in a cryptic form. One a sheet folded in to four, one segment is reinforced / backed for strength by another piece of paper. One corner missing (doesn't affect the text). Overall in good condition. 375 x 230 mm (14¾ x 9 inches).

Dodd was a Church of England clergyman and forger, who (despite public support) was convicted of a capital forgery at the Old Bailey, and was hanged at Tyburn in June 1777.