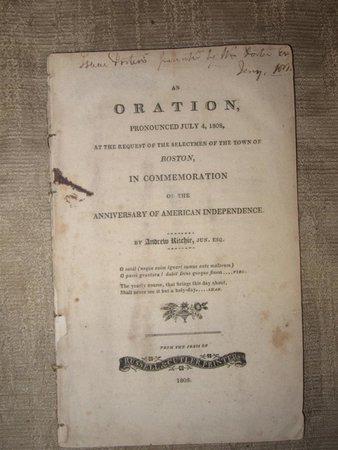 An Oration, Pronounced July 4 1808, at the Request of the Selectmen of the Town of Boston In Commemoration of the Anniversary of American Independence.

Boston: Russell & Cutler, 1808. Pamphlet, disbound. Title with printer's vignette, "vote of the town", text. Orations were given annually in Boston, often called "municipal Orations"; typically two or more addresses were given. The impetus for the tradition of municipal orations in Boston stemmed from an act passed at a town meeting in March 1783, when it was decided that the annual celebration of commemorating the Boston Massacre of March 5, 1770, be replaced with a yearly Independence Day celebration. The local newspaper reported following this oration:

"The Repertory tells us that Mr. Ritchie delivered an excellent Oration. So much the better for Mr. Ritchie! The Oration was doubtless federal, else it could not have been excellent, and it must have abused the President, else it could not have been federal, and it was delivered on the anniversary of independence, a fit federal occasion for abusing the government of our choice! " (American Mercury, 11 August 1808, 2) 19, [i] pp.

Condition: There is an owner's inscription on the title leaf. (Isaac Porter from Wm. Porter). There is some browning and foxing throughout (heavier towards the end); the first and last leaf are detached, the rest of the pamphlet loosely bound together.