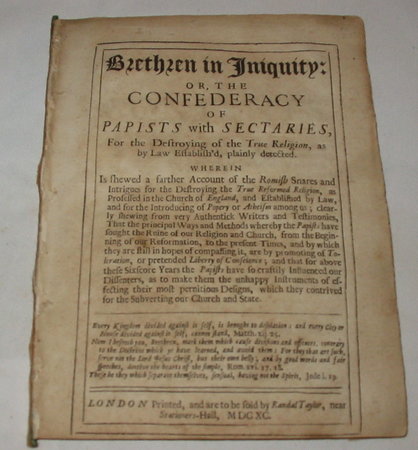 Brethren in Iniquity: Or, the Confederacy of Papists with Sectaries, for the Destroying of the True Religion, as by Law Establish'd, plainly detected.

London: Randal Taylor, 1690. Although the Popish Plot was ten years gone by the time this polemic was published, anti-Catholic feeling still ran high. This pamphlet purports to show all of the ways that Papists had attempted to undermine the Church of England since the Reformation. As such, this is almost a literature review of the previous hundred years, summarising Bishop Burnett, Stillingfleet and others, whilst quoting from Parliament and Catholic peers. It is followed by A LETTER OF THE MINISTERS Of the CITY of LONDON, Presented the First of January, 1645. to the Reverend Assembly of Divines sitting at Westminster, by Authority of Parliament, against TOLERATION. [4], 67, [1] pp.

Condition: This pamphlet has been abstracted from a collection, and so appears as a disbound item - with the binding marks and stab marks to the spine. No wrapper or cover (now held in a protective sleeve. The top edge of the first couple of pages is beginning to come away - although the binding is still holding securely. A touch of darkening to the front and rear pages, less so inside. There are pencil ticks throughout the work in the margins.