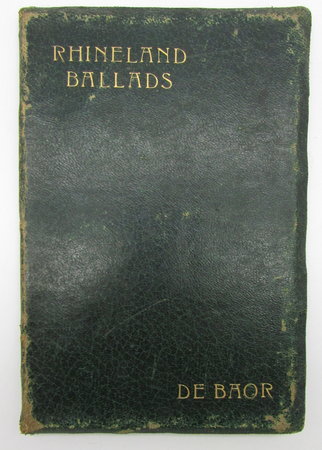 Cologne: Cologne Post: 1921. Small leatherbound collection of ballads (in the Kipling sense) written by members of the British Army in occupation of the Rhineland and based at Cologne. De BAOR is an acronym for "British Army in Occupation of the Rhine." The poems had been published in the "Cologne Post" which was a British Army newspaper. Limp dark green leather covers with gilt titles. Handmade end papers. An interesting collection of period military verse. Ownership inscription from the Excelsior Hotel (British army HQ). 46 pages

Condition: Some rubbing to the edges, but overall in good clean condition.