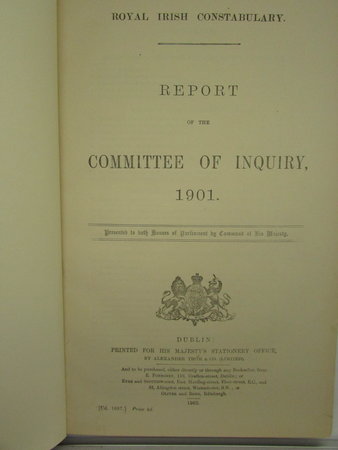 Dublin: His Majesty's Stationary Office, by Alexander Thom & Co: 1902. This work, two volumes bound as one, contains both the report, presented to both Houses of Parliament by Command of His Majesty, and the evidence behind the report. This latter is much scarcer, and contains transcripts of interviews and fascinating period information about Life in the Dublin Police at the turn of the Nineteenth to Twentieth Centuries. The reports have been bound in a recent blue buckram, with gilt titles. 33cm by 22cm (13 by 8¾ inches). A fascinating piece of history concerning the Royal Irish Constabulary (RIC). Report and recommendations from the committee on a claim by the Dublin Metropolitan Police to be placed upon the same footing as regards pay, allowances, &c. as the London Metropolitan Police. Contains extensive comparative information and lists showing differences between the two forces in relation to salaries, allowances, pensions, &c. 33, [i]., vii, [i], 1-246, [i]. pp

Condition: Fine condition. The recent buckram is spotless and without any damage. The report and the evidence are in beautiful condition, with a very slight darkening to the page edges only.