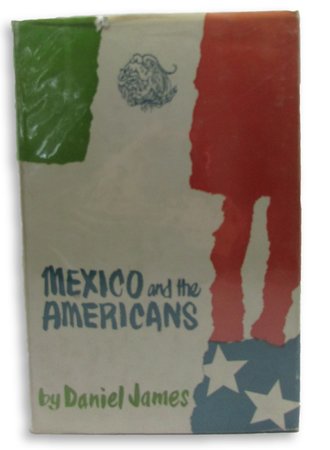 Mexico and the Americans

New York: Frederick A. Praeger, 1963. First edition. In original dust jacket. Fascinating, both historically and in the present climate. In James' own words "a provocative analysis of the history of relations between Mexico and the United States on all levels - diplomatic, military, economic, and social - considered in terms of Mexico's developing nationalism and America's attitudes to it". 472 pp. 220 x 150 mm (8¾ x 6 inches). Freelance American journalist, Daniel James (b. 1914), covered Latin America during the Cold War years. His writings reflect two themes: 1) that the region had become a primary target for Soviet aggression against interests of the United States; and 2) that American policies had failed to reflect the importance of the region to the United States. The author of hundreds of columns, articles and at least four books on these topics, including: "Red design for the Americas: Guatemala prelude" (1954), James first went to Latin America in 1953. He described Communist activity in Guatemala and in British Guiana in articles published in that year. James continued to publish articles reflecting his favorite themes in "Harper's," "The Saturday Evening Post," and the "London Observer." Later, he prepared a study of U.S. business activities in Mexico for the United States Embassy and the American Chamber of Commerce in Mexico (1956). From 1955 through 1967 Daniel James was a syndicated columnist for the Hearst Newspapers and SPADEA, publishing his views under the title: "Dateline Latin America." During the 1960s he published: "Cuba: the first Soviet satellite in the Americas" (1961); "Mexico and the Americas" (1963); and, "Che Guevara; A biography" (1969), the last written with the aid of diaries found when their Guevara was killed while trying to start a Communist revolution in Bolivia (1967). Subsequently, James was for four years a tourism director in Mexico City (1974-1978). After 1987 he operated the Mexico-United States Institute in Washington, D.C.

Condition: Dust jacket has some light bumping and a very small nick to the top edge on the front. Inside the book is in a very good / fine condition.