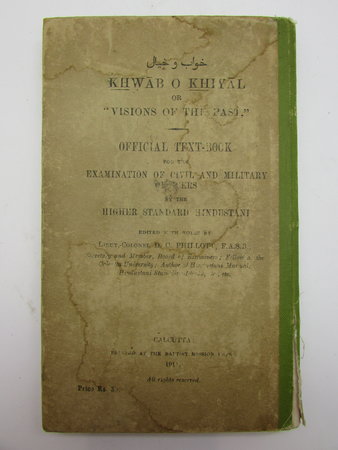 Calcutta: The Baptist Mission Press, 1911. First Edition. Hardback. Colonial British officers and civil servants who lived in India during this period were expected to learn to speak the Indian languages in order to communicate directly with their staff and men. Hindustani was the considered 'lingua franca', spoken as it was over much of the area which, at that time, constituted British India. 220 x 135 mm (8¾ x 5¼ inches). Higher Standard Hindustani examinations remained, virtually unchanged, until 1947.

Condition: Binding is tight and square. The paper covering the spine is split at the bottom. Boards are soiled but somewhat stained. The book has definitely been used as there are small / light pencil annotations to some pages.