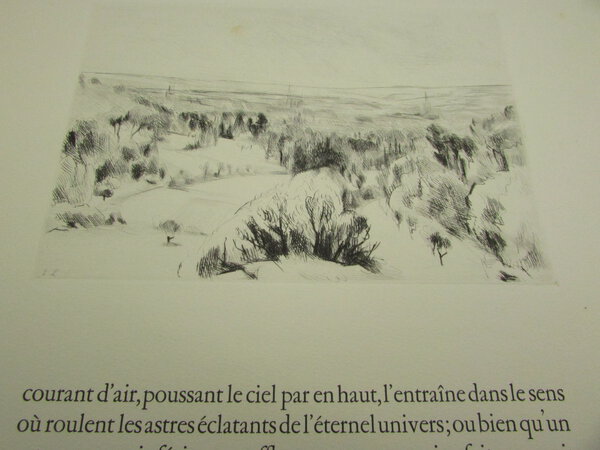 Paris: Edition du Nouvel Essor, 1934. First Edition Thus, limited Edition. 3/99. Signed by Léopold-Lévy to the limitation page. The limitation reads 'this edition was printed ninety-nine copies. The first five include a series of etchings on Japanese mother-of-pearl and the rejected plates; the next twenty-five include the continuation of the etchings on japon nacre. In addition, twenty copies numbered in Roman numerals were taken.' This does indeed have an additional suite of 47 engravings, (printed upon BFK Rives vellum, not japanese Nacre). There is a note to the advertising leaflet, that states that the 20 copies numbered in Roman Numerals, signed by the artist, are composed of the various other states. This copy is one of these. Slipcase and hard folder. Soft cover over the loose gathers. Red title to slipcase spine. Advertising leaflet / advance publication leaflet is also enclosed, printed on Rives. 102 pages + 47 etchings in the additional suite. 360 by 295mm (14¼ by 11½ inches).

Condition: The slipcase and folder are sound, but with a little marking to the cream parts. The paper is in very good condition, with some foxing spots. The extra suite of engravings also has a few foxing spots to them.