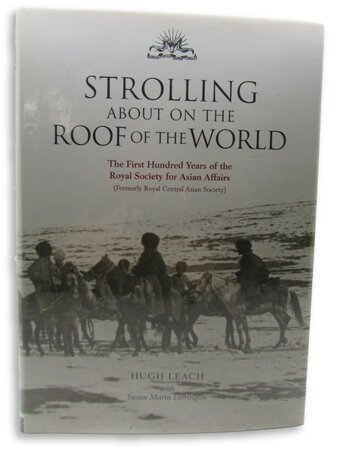 Strolling About On The Roof Of The World: The First Hundred Years of the Royal Society for Asian Affairs (Formerly Royal Central Asian Society)

London: Routledge Curzon, 2003. First edition in original red boards, with gilt titles to spine, and in original dust jacket. Illustrated throughout. An excellent copy. Signed to the title page by both the author, and Susan Maria Farrington. 229 pp. 250 x 185 mm (9¾ x 7¼ inches). Hugh Leach, OBE, was an Arabist who spent most of his thirty-six-year career as a soldier and diplomat in the Middle East. He was later a Historian of the Royal Society of Asian Affairs. Upon his death in 2015, the Royal Society's obituary said they considered this book - its centennial history - to be "an outstanding achievement for the Society".