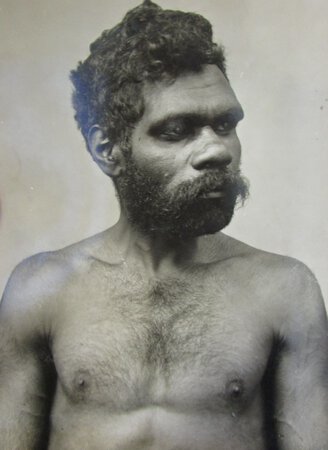 Bathurst, Australia: Sydney, Kerry & Co, C1900, Original Photograph
A lovely photograph of an Aboriginal man named Gingung.
Kerry & co / Tyrrell's Sydney - No. 1829 Gingung, Bathurst, warrior
Silver gelatin print, with Albumen paper process - Signed in the negative, Studio Stamped
Title written in the negative. Stamp (slightly visible, see image) on verso.
This is a print by Tyrrell from negatives from Kerry & co. There is a copy referenced at the Maas museum of New South Wales.
The photograph is stamped on back 'TYRRELL'S MUSEUM / OF / ANTIQUES BOOKS & CURIOS / 143 CASTLEREAGH STREET / SYDNEY' 1829 and identified by Smalls auctions in Australia as an early reprint from the original 'Kerry' glass negative. The sepia reprints are likely the working stock of the Kerry Studio that Tyrell acquired along with the original glass negatives.
"Produced by the Sydney firm Charles Kerry & Co. and part of the Powerhouse Museum's Tyrrell collection which contains over 2,900 glass plate negatives by Kerry & Co. Although a few appear to be from the 1880s most were produced between 1892 and 1917. Over this period, and well into the early 1900s, prints from these negatives appeared in many Australian publications and albums of views. In 1903 the company began producing postcards from these negatives, further establishing the images as some of the most significant and best known early views of New South Wales.
Some of the more significant themes covered by the collection include; views of New South Wales, Queensland, country towns, Sydney, Indigenous Australians, the South Pacific, rural life, native flora and fauna, and sentimental views. In addition there are a number of significant events from the 1900s covered by the collection including; Embarkation of troops for the Boer War, Hordens fire and the Inauguration of the Commonwealth in 1901, the arrival of the Great White Fleet and the Burns verses Johnson boxing match at Rushcutters Bay in 1908."
Geoff Barker, Curatorial, January, 2009. 205 by 150mm (8 by 6 inches).