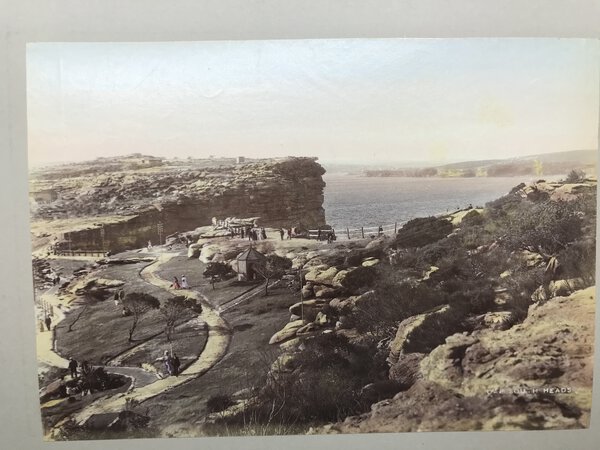 Antipodes: 1900. - Two albumen prints - mounted on the recto and verso of an oblong of grey card. One side showing The Gap and South Head at Watsons Bay in the eastern suburbs of Sydney, Australia (circa 1903); and on the other side a view of the town of Hobart, Tasmania (from Lansdowne Crescent) taken by John Watt Beattie.
- Two collodion paper prints showing the harbour of Lyttelton, New Zealand by an unknown photographer, and a landscape view across the Bealey near Christchurch, New Zealand taken by E. Wheeler & Son - these also mounted on the recto and verso of an oblong of grey card.
- One unmounted collodion paper print is of the Waimangu Geyser, which is located near Rotorua, New Zealand. This says JM2070 on the front - and possibly refers to the James Ingram McDonald (the painter, photographer, filmmaker, museum director, cultural ambassador, film censor, and promoter of Maori arts and crafts) and may have been taken whilst he was employed by the New Zealand Government Tourist Department in the early 20th Century. The geyser was known to erupt on a cycle of around 36 hours and would reach heights of up to 450 metres. Written on the verso of the photograph it reads: "The column of steam is about 1200 feet high". This geyser stopped erupting in 1904.