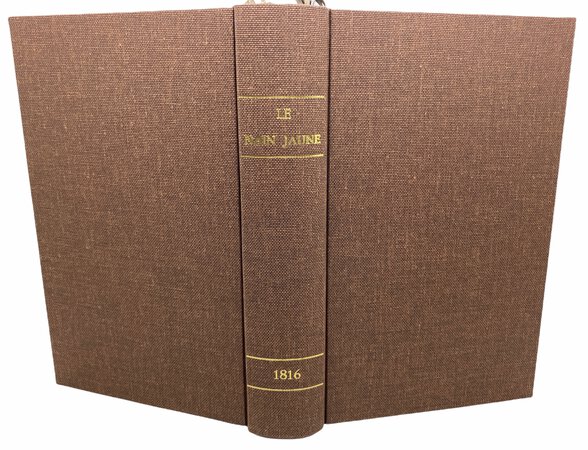 Bruxelles: Imprimerie de Fain. Recent brown cloth with gilt titles. IVme Volume for 1816 - 24 issues. The complete second half of the year, including the scarce Tricolour issue, which was published in blue, white and red. Binding and end papers are spotless. The newspaper is clean and tidy, with a few pages uncut. Slightly darkened and some minor edge wear, but overall an excellent example. Le Nain Jaune was a pro-Bonaparte political newspaper, openly displayed on Napoleon's return. At the second return of the Bourbons, the newspaper was suppressed. In 1816 Cauchois-Lemaire had fled to Belgium and the newspaper was published from there. In November 1816 it was merged with the Mercury Surveillant to become Le Liberal [ii]. 266 [ii] pp. 230 x 150 mm (9 x 6 inches).