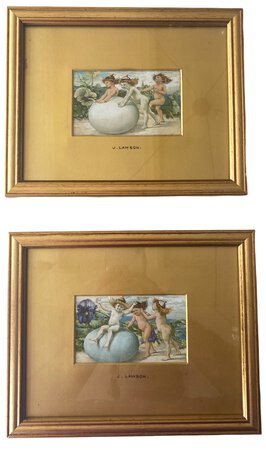 A pair of Victorian miniatures of Pixies

Born in 1838 in Dunfermline, Scotland, he moved to Edinburgh, beginning to exhibit works at the Royal Scottish Academy in 1857, and then to London. Though he worked variously as a painter, sculptor and stained glass designer, John Lawson is best remembered as an illustrator of books and periodicals. His early work relates to those by his fellow Scotsman, Joseph Noel Paton, who is likely to have been a close friend. However, his later colour plates reveal his ability to adapt to a new market for popular children's books and annuals, and so work alongside his eldest daughter, Lizzie Mack.
His known contributions include: Stories Told to a Child by the author of 'Studies for Stories' (illus. with others, London, Alexander Strahan, 1865), Nursery Times; or, Stories about the Little Ones by An Old Nurse (London, Griffith & Farran, 1867), The Daisy and her Friends. Simple tales and stories for children by Frances Freeling Broderip (illus. with others, London, Frederick Warne & Co., 1869), The Children's Garland from the Best Poets selected by Coventry Patmore (London, Macmillan & Co., 1873), Little Talks with Little People (illus. with others, London, Cassell, Petter & Galpin, 1877?), The Little Folks' Picture Album (illus. with others, London, Cassell, Petter, Galpin & Co., 1877), Little Rosebud's Picture Book (illus. with others, London, George Routledge & Sons, 1879), Clever Hans by the Brothers Grimm (London, Thos. de la Rue & Co., 188?), God is Love. Bible stories and pictures for the young by Mrs Haskell (London, Ernest Nister, 1895), There Was Once: Grandma's Stories by Mrs. Oscar Wilde (London, Ernest Nister, 190?) and Bible Stories and Pictures (London, Ernest Nister, 1908).