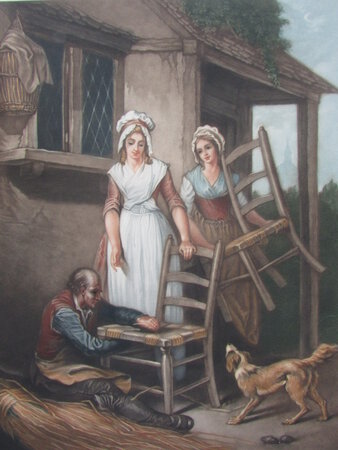 Old Chairs to Mend. A lovely twentieth century image from the "Cries of London" series, signed by Appleton.

London: Henry Graves & Co, 1907. Printed by A. Salmon of Paris. The "The Cries of London" has been a recurring theme in English print making for over three centuries. The series of thirteen paintings by Wheatley were amongst the most popular. Originally published as print 10 in the series, St Paul's can be been in the background. Engraved by Thomas G. Appleton. Signed in pencil by Appleton to the bottom right. The impressed area is 450 x 360 mm (17¾ x 14¼ inches).

Condition: Overall this is in lovely condition. The image is clean and bright. There is a touch of light foxing to the cream paper surrounding the print (but not the print itself).